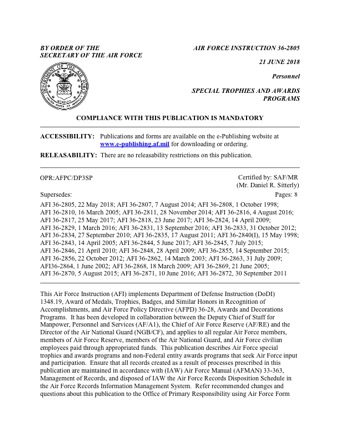 The Air Force 1206 form is filled out when an individual is nominated for an award. The individual can be either an airman or a civilian who has been nominated for a myriad of reasons can receive Air Force awards. Typically, awards are used to recognize particular acts of courage, as well as individual achievements. The 1206 application form is filled out in order to maintain a standardized awarding practice. The armed forces have always used a merit system and this is part of that system that recognizes individual work from air force personnel. These nominations are made within certain restrictions – they are to be no longer than two pages long, in size twelve Times New Roman font. These processes allow for visibility for the Air Force as a professional organization. With PDFSimpli you can find the instructions and make your 1206 from here.

This form serves a specific purpose, in that it allows individuals to be recognized through the Air Force program for outstanding acts. The form itself allows for the processing of award nominations to be standardized and easily reported on a yearly basis. However, the primary purpose of filing this form is for use during the Quarterly Performance Awards, which are presented at the Squadron level. Ultimately, there are specific categories that awards are presented for, which are further broken down into specific types of awards filed under each category. Nominations for each category allow for competitiveness in each award level and may be presented in topics such as Leadership, Community Engagement, Significant Self Improvement, and Positive Representation, among others. Typically, each category has an approximately equal number of nominations, so that each award allows for a fair level of overall competitiveness. The ultimate goal and purpose of this form are to provide each individual with the ability to be fairly recognized for significant accomplishments.

Many individuals may find a use for this form, as it can be used for airmen as well as civilians. However, the specific target audience for this particular form tends to be airmen, as well as their commanding officers. These forms are primarily used in Squads. Individual airmen may often fill out this form to nominate individual airmen for their achievements throughout the course of their Airforce career. Other individuals who may find the form useful are those who process annual reports for the Air Force, as these forms are required for nomination for official Air Force rewards.

When Should You Use the Air Force Form 1206 PDF Form?

Typically, this form is used when one wishes to nominate an individual, whether they are an airman, squadron member, or regular civilian for an Air Force award. These awards are often distributed for excelling in areas of leadership, significant self-improvement, as well as an incredible positive representation of vital Air Force values. Often times, this is used within squadrons to recognize individuals at their Quarterly Performance reviews. Therefore, it’s typically filled out in the appropriate time frame to be reviewed for an individual’s nomination for an award in the category the nominator feels is most applicable.

What Are the Consequences of Not Filling Out the Air Force 1206?

While there are no long-term detrimental consequences for not filling out this form, it does keep potential nominees from being nominated for awards. Failure to file may also make it difficult, in the long run, for awards to be fairly distributed, as it is typically expected that each category has, approximately, an even number of nominees in each category of award. Furthermore, it denies anyone who may be deserving of an award from the potential to receive one. Of course, it also hinders the visibility of the achievements of the Air Force.

Steps for Filling Out the Air Force Form 1206 PDF

This is typically done in bullet format, with primary information, dates, and facts that have lead to the nomination. These should articulate accomplishments that would ultimately allow the nominated individual to appear to exceed the threshold of expectation.
The form is provided online, through the Air Force database, free of charge, in printable versions, as well as versions that are pre-filled, allowing you to fill in information for each individual as needed.
Any individual who meets the qualifications of each award may be nominated using the form, whether they’re a civilian, airman, or a fellow squad member. Often, awarding happens within a squad, however, making choices more limited. At larger functions, though, a wide range of individuals may be nominated for certain awards, depending upon the criteria that must be met to qualify.